Within the pages of the Charity Section, there are descriptions of how to Donate for the categories of:

Recent developments have identified two further methods which individual members may like to use:

These are described in the Sections below.

This method uses the Masonic Charitable Foundation website, in conjunction with the JustGiving online platform, which was specifically created in 2000, to enable the collection of charitable donations.  Initially, JustGiving took a percentage charge on donations, and asked for a contribution from the donor to cover operational costs.   Now, there is no charge to charities, and donors are asked if they wish to contribute to costs, which can be avoided completely, so that this method is efficient and highly cost effective.

There are two main options open to members:

1) Make a single donation to the Royal Arch Benevolent Fund

Whichever a member wishes to do, the easiest way to gain access is to follow the MCF Appeals page – https://fundraising.mcf.org.uk/Appeal-E0135

There are other routes available, but this one is the simplest, and the JustGiving website is highly ‘user friendly’. The link above takes the user directly to the Royal Arch Benevolent Fund appeal, which enables users to either donate directly to the RABF, or to make a contribution to an existing individual appeal within the Royal Arch Benevolent Fund appeal itself.

If at a Chapter meeting where a collection is being taken (of course using Gift Aid envelopes), members who are not able to attend, or who would like to make a further donation, can do so by using this method.  The system will enable individual members to make donations to the RABF, or a specific charity for a Chapter Charity Steward to open an Appeal for the RABF for a specific Chapter. Users are guided through the process by the JustGiving website.

If the donations are for a Chapter appeal, the Chapter should advise the Provincial Charity Steward if it is a local charity which the Province may also support, and the total raised, including gift aid and any contribution from the Province may then be forwarded to the charity concerned.  Whichever method is used, the funds are directed to the Royal Arch Benevolent Fund Relief Chest, which is under the control of the Provincial Charity Steward.  He is able to either hold the funds for the time being, or to send on to a charity as directed by a Chapter, after having considered supplementing the donation.

All funds raised are held in the Relief Chest (E0135) managed by the Provincial Charity Steward, and he will be able to advise individual Chapters how to proceed if the accumulated funds are to be allocated to another charity, using the Chapter Charity Support Scheme.

Whichever method is preferred for use, the donation (individual or Chapter) will help the Royal Arch Benevolent Fund to support non-Masonic charities throughout Warwickshire.  Chapters are encouraged to support the Royal Arch Benevolent Fund, so that the aims of the fund can be achieved.  If Chapters can donate to the fund during at least one of their meetings each year, the support will be greatly appreciated.

There is no need to access the Just Giving website directly, but just for information the address is https://www.justgiving.com/

The QR Code method of making donations, is now available, for which there are codes dedicated to the Royal Arch Benevolent Fund, as shown below: 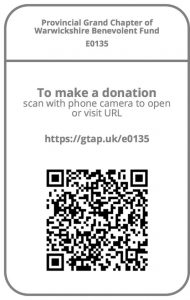 This QR code and website link is only for the Royal Arch Benevolent Fund E0135.  If a Chapter Relief Chest holder wishes to set up a link to their own Relief Chest, there is a procedure which is mentioned below.

Donations can be made by printing the QR code on a summons or email, or any other material, or viewed on a screen, and then scanned by hovering a mobile phone camera over the code, which takes the user directly to the dedicated donations page to make a donation.  This can be done prior to a meeting, or at a meeting, and would (if all present did the same) eliminate the use of envelopes and saves the Charity Steward having to summarise the envelope slips.  It must be remembered that the donations are directed to a nominated Relief Chest, and subsequently directed to a desired charity, or left for the use of the holding unit.

It is usual to provide a unique website address with the QR code, for those who are unable to scan the code with their phone.

Links to guides and videos are detailed below explaining use of the QR code and website address.

Video – Donating with a QR Code