Vesey Chapter gets the set!

As with so many other chapters, the companions of Vesey Chapter were returning to their masonic business having not met since February 2020.  They didn’t need to worry about trying to remember the opening as the Provincial team took care of that with consummate ease.  EComp Phil Gough was ably assisted by EComps Peter Huckle and Rod Hinton, and they were escorted by EComp James Freakley, one of the ProvDepGDCs.  When asked if all was well, EComp James indicated that he had spoken with the chapter Scribe E to check that everything was in order.  Well, companions, EComp James is the chapter Scribe E so that must have made for an interesting conversation!! 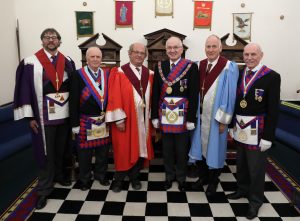 Having been to a number of installation convocations, I believe that I witnessed a first – Vesey truly got the set with EComp David Barrie installed as Z, EComp Andrew Leonard inducted as H and EComp John Sheath proclaimed as J.  The presiding officer obviously felt that he was being under employed as he also presented a Grand Chapter certificate to newly(ish) exalted companion Neil Harrison.  What was also a wee bit different was that Comp Neil was elected and invested as the chapter treasurer – well done to him for taking on such an important office so soon after joining.  It was also good to see that the chapter is looking healthy with two candidates re-balloted for exaltation.

The evening then moved to the Festive Board and it was good to see the room so full.  With the Provincial Almoner in attendance, acting as the Third Provincial Principal, it is perhaps not surprising that the chapter supported the Warwickshire Royal Arch Benevolent Fund with the alms collection, which amounted to £185.  It has suffered from the obvious lack of chapter meetings and it was good to see Vesey doing their bit in boosting this most important fund. 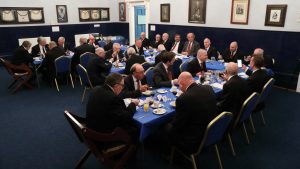 Amongst the visitors was a certain EComp Suresh Modi who was unsurprisingly armed with his iPhone.  Numerous photos were taken which perpetuated one of the most asked questions in Warwickshire – what exactly does he do with them all??? 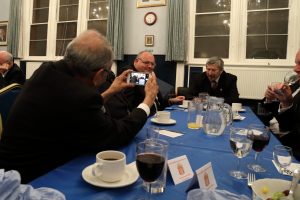