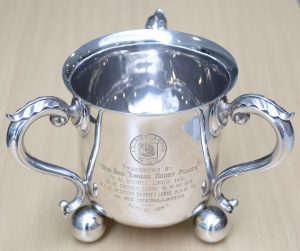 ‘As I approach the third anniversary of my appointment as GSupt I have reflected on my experiences so far and I have been struck by one thing in particular. That is that, compared to the Craft, Companions don’t tend to visit other chapters across the Province anywhere near as frequently. I feel we need to share the love companions and to that end I want to introduce you to ‘TLC’. You are all no doubt familiar with this acronym but on this occasion it does not mean ‘Tender Loving Care’ but rather the ‘Travelling Loving Cup’ – and here it is.

The idea Companions is that the Travelling Loving Cup can be cared for by any chapter in the Province, but can also be claimed by any other Warwickshire chapter if 3 or more companions of any one chapter visit the host chapter. The TLC will be housed safely in a travelling box and will be accompanied by a written record of its journey around Warwickshire.

The travelling loving cup has been generously released from the Warwickshire Masonic museum where it was donated by the former Chapter of Charity, the previous members of which having given their blessing to its use.’

This page will give details of the present Chapter who holds the cup and give all that opportunity to wrest it from them.

Having held the Cup for just ten days Athol Chapter No 74 gave it up to former holder Leigh Chapter No 887; they hold their next Meeting, on 3rd January.  Remember 3 or more Companions attending will wrest it for your own Chapter – and perhaps take it away from Severn Street. 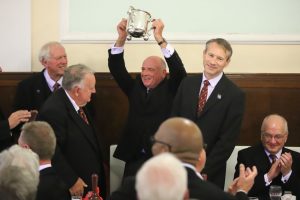