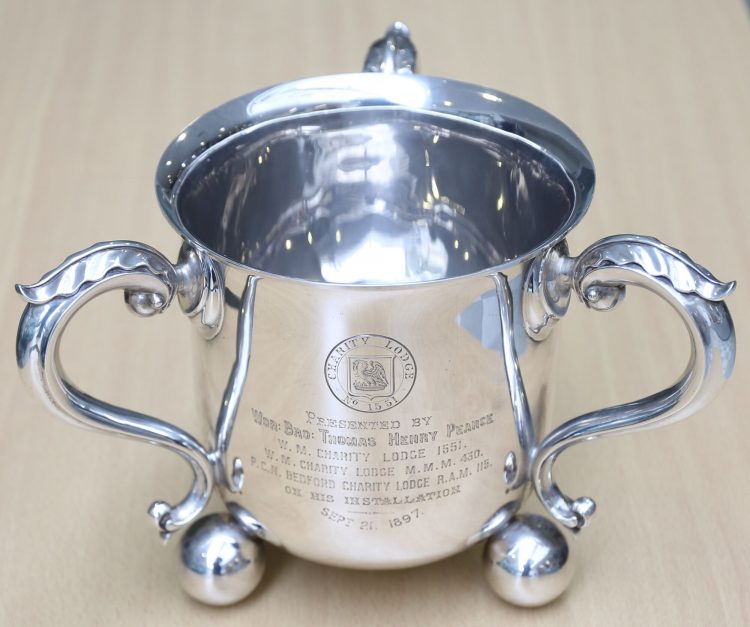 One of the great new initiatives announced by the Most Excellent Grand Superintendent, E.Comp. Philip Hall, at the Annual Convocation was the introduction of the ‘Travelling Loving Cup’.  As the MEGS said:-

‘…compared to the Craft, Companions don’t tend to visit other chapters across the Province anywhere near as frequently. I feel we need to share the love Companions and to that end I want to introduce you to ‘TLC’. You are all no doubt familiar with this acronym but on this occasion it does not mean ‘Tender Loving Care’ but rather the ‘Travelling Loving Cup’ – and here it is.’ 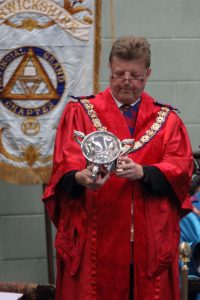 This is a magnificent cup which with their kind permission has been drawn from the collection of the Warwickshire Masonic Museum and can be ‘claimed’ by any Chapter if three or more companions of any one Chapter visit the host Chapter. The TLC will be housed safely in a travelling box and will be accompanied by a written record of its journey around Warwickshire.  As you can see from the photograph the cup was originally presented to Charity Lodge No.1551 by W.Bro. Thomas Henry Pearce, on his Installation in September 1897.  I am sure that he is looking on now feeling that this is a very appropriate way for his cup to be used.

The Cup was presented to E Comp Chris Stoner from Shakespeare Chapter no 284 who have had 3 exaltations in the year at the Annual Convocation.  But in line with the aim of the initiative it has already made its way onto to another Chapter, fifteen members of Leigh Chapter having attending Shakespeare Chapter’s recent meeting. 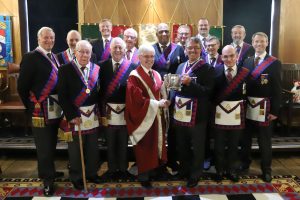 In September Leigh Chapter No.887 will be celebrating their centenary on the 6th at Severn Street Masonic Hall, an ideal opportunity for many Chapters to try and wrest the cup from their hands.