Shakespeare Chapter off to a great start!

Thursday 26th August 2021 was a very special day for the companions of Shakespeare Chapter in particular and for the Province of Warwickshire in general.  It was their first convocation – an emergency meeting to elect and install the three Principals – for quite some time (can’t think why?!?).  It was also a worrying time for those who had something to do as the hiatus has left us all rusty – would we remember what to do, what to say and, perhaps most worryingly, would our morning dress still fit?????  I’m pleased to report that we needn’t have worried…. on all fronts!! 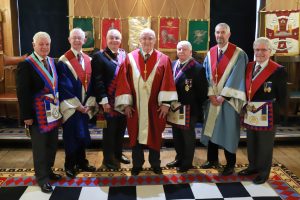 In addition to a good number of Shakespeare companions, who made us most welcome, the Province was well represented with EComp John Starley presiding and EComps David Evans and Gary Evans acting as the Second and Third Provincial Grand Principals respectively along with EComp Geoff Walker in his first run out as an acting GStB – he looked very smart in his new regalia – and another seven acting officers to boot.

The main business was the re-election of the three Principals for the ensuing year and the subsequent inductions of EComps Mervyn Kimberley and Graham Brammer as Z and H and the installation of Comp Peter Knell as J.  The various elements of the ceremony were performed with sincerity and dignity even if some of the words were not quite the same as in the little red book.  EComp Chris Stoner took much of the praise as the Installing Principal but everyone involved did a great job.

Having then invested their officers, the Principals then presented EComp Chris with ‘a commemorative jewel’ as IPZ.  They don’t have PZ’s jewels but rather present the oldest thing in their possession – a small Royal Arch breast jewel, complete with a small representation of Shakespeare on the ribbon.

The chapter was then closed – no risings remember, it was an emergency meeting! – and we headed downstairs for the Festive Board. 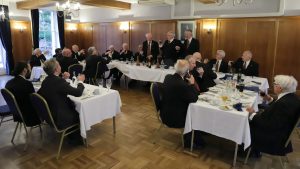 A lot has happened since we ceased our masonry.  Like the many other units that meet at Alderson House, the companions of Shakespeare mourned the loss of Liz, wife of EComp Peter Round, who sadly died recently.  The MEZ, who is also the charity steward, appealed most eloquently on behalf of ‘Little Mollies’, a charity very dear to Liz’s heart.

Little Mollies is in fact Molly Olly’s Wishes and it supports children with life-threatening illnesses and their families to help with their emotional wellbeing.  You can read more on their website – https://www.mollyolly.co.uk.  The Principals were delighted to present EComp Peter with the money collected from the alms and a small raffle – £220 in total.

All in all, it was a wonderful evening and the companions reflected on just how special it was to be together once more.