Shakespeare Chapter at it again! 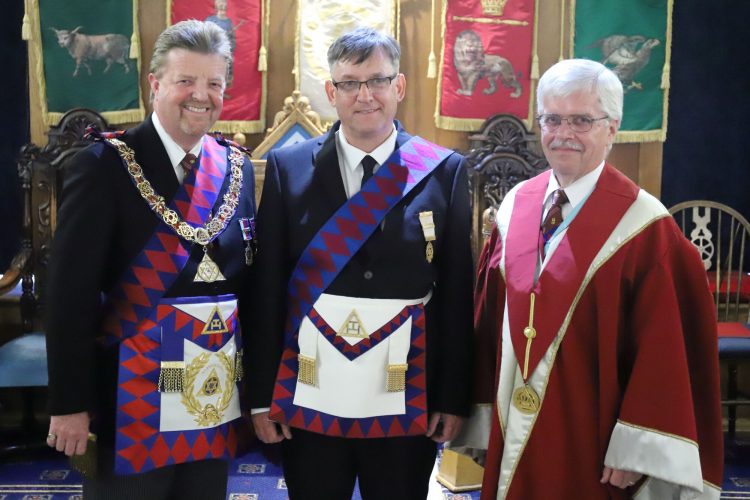 The welcome from the Companions of Shakespeare Chapter, a very friendly Chapter meeting in Warwick, is always very warm. Their recent meeting fell on what apparently was the hottest day ever recorded so their welcome was especially warm! Thankfully, the air-con at Alderson House worked overtime to maintain our personal comforts and all who attended were able to enjoy the evening.

Those same companions of Shakespeare Chapter were certainly able to be very pleased with themselves. Not content with the accolade of being the first recipient of the Travelling Loving Cup, at their recent meeting they welcomed another companion into our wonderful Order when they exalted Bro Andrew Williams. Presented at the recent AnnCon and with their next meeting falling only a few weeks later, their stewardship of this cup was always going to be short-lived.

It did, of course, mean that the meeting was very well attended, by no less than 30 visitors including the Grand Superintendent, who were all privileged to witness a most sincere and enjoyable ceremony. It was a delight to see the work equally divided between the Principals as well as the Sojourners. It was noteworthy that during the first part of the ceremony, the candidate was most ably attended on by the Second Assistant Sojourner, Comp Paul Morgan. ‘So what?’, you may think. Companions, I should add that Comp Paul was presented with his Grand Chapter Certificate immediately prior to the exaltation ceremony, having himself been exalted at the previous meeting! New Exaltees are usually encouraged to attend another exaltation as soon as possible but it is far from usual for them to be involved in the ceremony themselves!!

An excellent meeting was then followed by a most convivial festive board at which we learnt all manner of things. We discovered that the Grand Superintendent is a wee bit de-mob happy, as this would be his last Masonic commitment for around 6 weeks. He added that it had been a great start with the TLC and congratulated Leigh Chapter on its magnificent turnout. We also discovered that the MEZ, EComp Chris Stoner, had a very tenuous link with said Chapter – his Mother Chapter in his Mother Province of Essex is Leigh-on-Sea Chapter No 4708!