The June meeting of the Provincial Grand Stewards’ Chapter had something of interest for all present – and there were over 80 present from all corners of the Province.

After the usual commencing business of the Chapter, the MEZ welcomed M E Comp Joseph Morrow, and explained how he had made contact last year to invite a speaker, who was delighted to attend in person.  This should have occurred in December 2021, but after the intervention of the covid virus, E Comp Morrow was unable to attend. 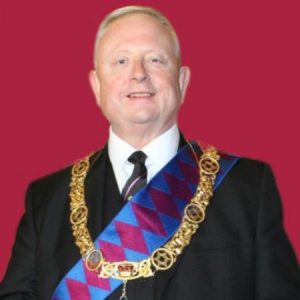 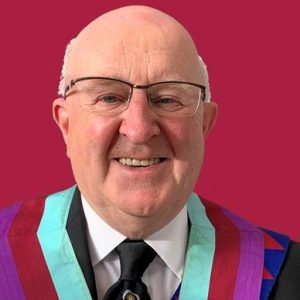 The First Grand Principal is a fascinating character, holding numerous high ranking positions, including Companion of the Most Noble Order of the British Empire, Lord Lyon King of Arms, Order of St John of Jerusalem, Queens Council, Deputy Lieutenant, and many more honours.  He was also the Grand Master Mason of the Grand Lodge of Scotland in 2004-2005. 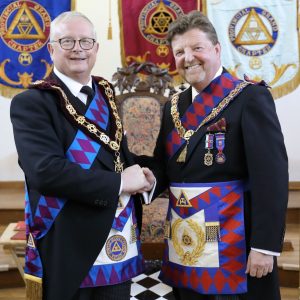 A first class speaker, M E Comp Joe (as he prefers to be knows) explained many of the differences between English & Scottish Masonry, particularly the Mark degree, where in Scotland this is considered part of the second degree.  All Scottish masons who have been passed to the second degree, also automatically experience the ceremony of Advancement in the Mark degree too.

In addition, Royal Ark Mariner candidates can be elevated to the order from both the Craft and the Royal Arch in Scotland, and interestingly, the Cryptic degrees come under the jurisdiction of Grand Chapter in Scotland.

ME Comp Joe also explained that in Scotland they had rewritten the traditional ‘Three Rs’ so that their interpretation is Respect, Relevance and Renewal.   His lecture was largely based on this theme, and kept everyone thoroughly engaged and enthralled.

Following the lecture, the normal business of the Chapter proceeded, chiefly being the installation of E Comp Paul Harrison as MEZ, E Comp Nick Renton as Haggai, and E Comp Brian Stopford as Joshua.

The finale to the evening was a proclamation by E Comp Geoff Walker covering all of the Grand Officers present – a very long list, perfectly memorised and recited.   At the festive board, Geoff received loud acclaim for his mammoth effort and turned the colour of a pale beetroot with embarrassment. 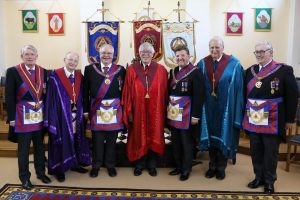 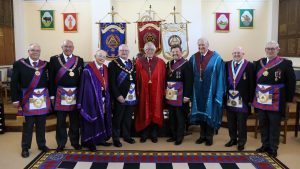 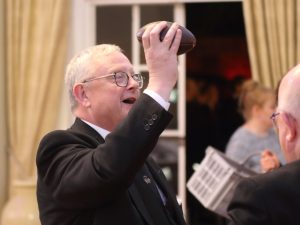 At the Festive Board, the First Grand Principal of Scotland was presented with a miniature Rugby Ball, to mark his sojourn in the market town of Rugby. 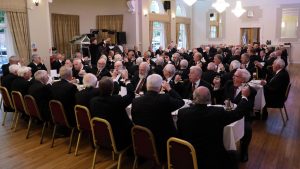 A packed Festive Board with the Grand Superintendent taking wine with all present.

Asstistant to the Provincial Grand Principals