On my Way Home – From our Correspondent

All good things must come to an end Companions.  After an excellent week of roving reporting, it is time for me to return to, as the Provincial Communications Officer eloquently described it, my Babylonian captivity in Wiltshire!  The final trip out was to Leamington to Guy’s Chapter No 395 where we were made very welcome.

We were treated to an exemplary opening by the Presiding Officer, EComp Philip Gough – anyone would think that he’d done it before.  He was most ably assisted by EComps Peter Huckle and Nigel Hawkins, who have something peculiar in common – EComp Peter was the Craft Provincial Grand Treasurer and EComp Nigel is, of course, the current RA equivalent.  It was special for EComp Peter as Guy’s Chapter is his Mother Chapter and, perhaps unsurprisingly, he is the current treasurer.

Having opened the chapter, the minutes were quickly dealt with before the Chapter Principals were invited to resume their rightful places.  The Assistant SE then took us all back in time to the 24th February 1919 by reading the minutes from that meeting.  He began by reporting that it had  opened at 6:05 pm with 31 companions present.  The three Principals were installed and then the Provincial Grand Janitor then delivered the address to them – at this point, dear reader, my heart missed a beat as I hadn’t realised that Provincial Grand Janitors did that sort of this but, worry not, it was soon revealed that it was, in fact, the Provincial Grand Joshua who presided – phew!  Another notable item was a presentation of a revolving breakfast dish to a companion who had recently married.  Companions, if you have that special person who you thought had everything and you didn’t know what to get them for their birthday or Christmas, then you now have the answer – a revolving breakfast dish, whatever that might be!!

As with many meetings, money matters were also included with a donation of 5 guineas to the Warwickshire Benevolent Fund being approved.  The Chapter had also received notification from Guy’s Lodge that the rent would be raised from 8 to 10 guineas.  For the younger readers who have no concept of guineas, sadly I cannot help further as I am far too young  but I’m sure that one or two of the more senior members of your chapter will be able to enlighten you!  On a much more positive note, the chapter was also pleased to receive propositions for no less than four candidates for exaltation which, I understand, were carried out as two separate double ceremonies – what a wonderful problem for the chapter.

Returning to the 21st Century we saw the installation of EComp Roy Dixon as MEZ and the induction of EComps Graham Standbridge and David Rose as H & J respectively.  Companions, we were reminded that EComp Roy is in training for a rather extraordinary adventure which will see him row the Atlantic (see https://www.warwickshirepgl.org.uk/news/warwickshire-freemason-to-row-the-atlantic for more info).  He departs soon after their November meeting and returns a few weeks before he installs his successor in February 2020 – lets hope that he remembers to pack his little red book! 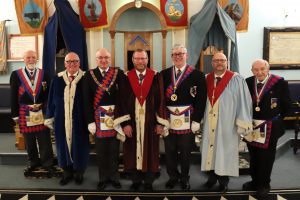 The evening soon moved downstairs to the Festive Board that, as you can see, was set out in a most appropriate way.  The fayre was hearty, the atmosphere warm and the toasts kept brief.  All in all, an excellent way of signing off my current sojourn in Warwickshire – watch this space for further roving reports…