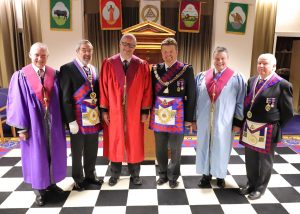 Over the next few days E Comp Simon Grave will travel from his Babylonian bondage in Swindon and will be undertaking a sojourn around Warwickshire Chapters.  His first visit has been to Faith & Hope Chapter No 4772.

Over twenty visitors were treated to a wonderful installation convocation by the Companions of Faith & Hope Chapter No 4772.  So often these days, an installation will see the recycling of one or more of the Principals but not this time.  All three Principals were installed in their respective Chairs in a most sincere and dignified way.  This would be reward for the plethora of Grand Officers and acting Provincial Officers who came to support the Chapter.  At their head was the Grand Superintendent who certainly earned his keep as not only did he deliver another exemplary address to the Principals but he also presented a Grand Chapter Certificate in a very relaxed yet informative way.

After a superb meeting, ably watched over by their Scribe Ezra, the well-known Companion John Hayward, the convivial atmosphere continued at the Festive Board.  Having appealed for the Warwickshire Royal Arch Benevolent Fund, in which their shy and retiring Charity Steward, E Comp Nigel Tongue, had asked the Companions to consider increasing their giving by 10% in line with the increases in the cost of living.  His argument seemed to be that by adding 50p with a fiver or £1 with a tenner, not only would the collection be increased but the extra weight would prevent the envelopes blowing away as he carried them to his car!  His optimistic and cheeky request obviously worked as the alms amounted to the fantastic sum of £244.

All in all, it was an excellent evening with the Chapter clearing in good heart.  With E Comps Mike Willetts, Ian Grayson and Colin Bennett at the helm and with a candidate in the pipeline, all is well at Faith and Hope!