The members of the Composite Chapter No 5727 and our visitors had a most enjoyable evening at our Convocation held on Thursday 13th January 2022, when we welcomed a new member into the Chapter.

The candidate, Brother Robert Kwasi Addi, a member of Darell Lodge No 5945 was proposed by our MEZ, E Comp Terry Preece and seconded by E. Comp Chris Addison our Scribe E. 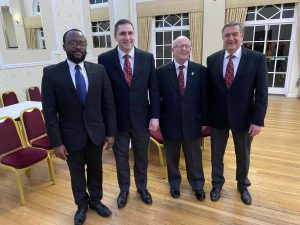 The Chapter was well supported by a number of visitors, including E Comp David Graham, the Assistant to the Provincial Grand Principals, with E. Comp Richard Clews, the Third Principal of the Chapter of Rectitude No 502 occupying the chair of Joshua. The photograph taken after the Festive Board shows, from left to right,  Companion Robert Addi, Terry Preece MEZ, Ray Walsh the Chapters H, and Richard Clews acting as the Chapters J, with lovely smiles on their faces.

The ceremony was conducted admirably by all those companions who took part, especially after such a long break, and Robert, now a Companion of our order was delighted with the whole experience of his Exaltation Ceremony, and followed by an excellent Festive Board rounding off a most pleasant evening for us all.