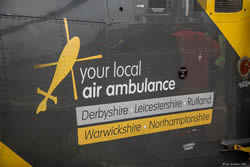 Freemasonry is the largest fraternal and charitable organisation in the UK. It not only provides support for the widows and orphans of Freemasons but also for many others in the community, making significant grants to many non-Masonic organisations. All monies are raised directly from Freemasons, their families and friends, and more than £75m has been raised over the last five years for a wide range of charitable purposes.

The personal generosity and fundraising activities of Freemasons ensures that monies are raised, not only through their Lodges but in their Royal Arch Chapters as well.

In June 2003 the Provincial Grand Chapter of Warwickshire Benevolent Fund was established under the Presidency of the Grand Superintendent with the objective of making a substantial donation every two years or so to a non-masonic Charity.

Since 2007 other charities around Warwickshire have received grants, among which have been The Warwickshire Firefighter Fund, Age Concern to purchase a people carrier and Crossroads Care in Coventry to set-up a Stars Club for children with special needs and disabilities. 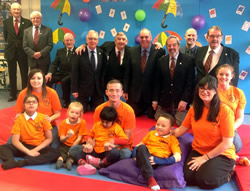 A more recent donation of £23,000 from the Benevolent Fund has been committed to the Wilson Stuart School in Erdington, Birmingham http://www.wilsonstuart.co.uk/ to fund new rebound therapy and nursery facilities. This is taking place in two phases, the first of which was completed in March 2016 and the second planed for completion in October 2017. The new dedicated rebound therapy facility, will be used by primary and secondary age children with complex physical and learning disabilities.

A key feature in the new room is the special floor level, trampoline style rebound bed, which helps children to relax, develop their balance skills, improve concentration and enhance their movement and fitness levels.

Wilson Stuart School express their appreciation to the Royal Arch Freemasons of Warwickshire on their website. http://www.wilsonstuart.co.uk/about-us/rebound-therapy/