There are very few Chapters which manage to celebrate 200 years of continuous existence, but the Chapter of Fortitude, being Warwickshire’s oldest Chapter has celebrated this rare epoch.  To quote the words of the Most Excellent Grand Superintendent, “the achievement of more than 200 years is beyond rare and a privilege for us all to be able to join the bicentennial+ celebrations”.

The evening commenced with the E Comp Philip Hall, MEGS, accompanied by E Comp John Starley, 2nd Provincial Principal and E Comp Nigel Hawkins, 3rd Provincial Principal, opening the Chapter.  In his opening comments, the MEGS thanked all the Companions of Fortitude Chapter No 43 for the part they and their predecessors have played, and continue to play, in the success of the Province in general and of this chapter in particular. 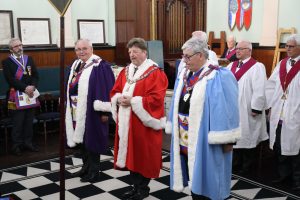 The celebrations commenced with E Comp Peter Wellings, Scribe E, firstly reading an extract of the minutes of 200 years ago, and then commenting on the history of the Chapter.  This proved to be fascinating, and explained initially why the bicentenary is classed as 200+.  It could easily have been labelled as 239 years, as the Chapter was originally consecrated in 1783.  There were two periods of inactivity – first in 1820 when a fire brought meetings to a halt for a short period and a confirmatory warrant was issued in 1821.  It would also appear that between 1858 & 1862, the Chapter did not meet and a further warrant was issued.  Confused – please see Peter’s full paper – here.  There are many unusual events covered in this paper, including the consecration of a canal tunnel – see here.  Also included in Peter’s explanation was reference to the late W Bro Bob Russell, who was the original author of the Lodge’s history – his preface to the original history booklet is here

The meeting continued with the Oration prepared by E Comp Nigel Hawkins, Provincial Grand Joshua.  The full Oration is accessible here, but one particular part stands out –  “The English word “Fortitude” is derived from the Latin “fortis” meaning strong, powerful, vigorous, steadfast, courageous and brave.  There is also very much an underlying element of resolve over a long period of time. How apt is the name fortitude for such a long lasting and independent Chapter?!” 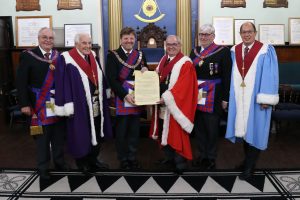 The original Charter was then read by E Comp David Graham, Deputy Grand Superintendent, followed by congratulations from the MEGS, who requested that the Principals of the Chapter returned to their Chairs.

Returning to the summons, the Principals were proclaimed for a further year, Chapter business dealt with, and the meeting concluded, followed by a splendid festive board.

Many congratulations to all concerned for a superb evening. It was pleasing to see many Acting & Grand Officers present, including two Past Grand Superintendents and a visiting current Grand superintendent, all enjoying the celebrations. 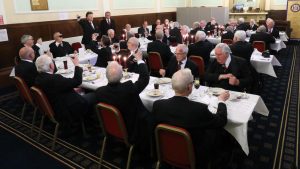 The Festive Board in full swing – the MEGS takes wine with all present.