Athol at it again!

If you want to know the time, we were always told to ask a policeman.  If you want to have a very special night and see some very different ritual, well it’s very simple – you need to visit Athol Chapter No 74.  As the second oldest chapter in the Province, they do things a wee bit differently.  The Provincial team, most ably led by EComp Phil Gough and assisted by EComps Hector Swindell and Alan Ellis acting as Provincial Second and Third Grand Principals respectively, had to have a crash course in Athol workings. 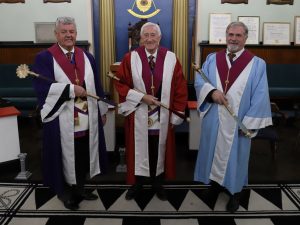 Thankfully it appeared to have helped as they opened the chapter seamlessly – well it seemed so to me at least but I am not a member of Athol so don’t know what they should have said and done!!

What was also a delight was to see two very familiar Warwickshire companions progress in the persons of EComp Gary Macauley and, now, EComp Paul Jenkins as they were both installed into the chairs of H and J respectively. 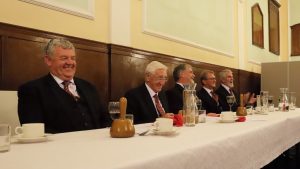 A wee bit of recycling completed the set with EComp Mike Perrott being inducted as Z.  Again, the difference in Athol workings was evident but I am not going to spoil it – you need to witness it for yourself so make sure you go along to their next installation convocation.  It was also great to hear that Athol continues to be a vibrant chapter – already blessed with a good number of members – as they have four candidates in the offing.  If the installation ceremony is anything to go by, an Athol exaltation must also be quite something to see.

The entertainment continued with a most conducive Festive Board.  The Severn Street fayre was up to its usual high standard as were EComp Roy Piddington’s jokes. 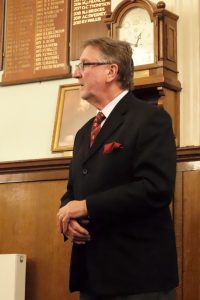 As Scribe E, EComp Roy proposed the toast to the visitors, which was, as the members are now well used to experiencing up to his usual and very amusing quality.  Another good reason for visiting Athol, we were well fed and left chuckling!! 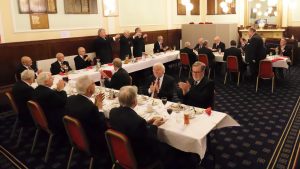 PS. There was only one ex-policeman there – EComp Phil Gough – and I forgot to ask him the time – doh!!