The great and the good were out in force last week at Kings Norton Golf Club. The reason – the annual Royal Arch Principals’ and Past Principals’ Dinner. Nearly 160 Warwickshire companions had gathered to hear the ME Grand Superintendent’s ‘state of the union’ address and to find out what’s on and what’s in the pipeline. 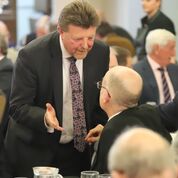 The first question on everyone’s lips was which chapter was best represented. The MEGS soon put us out of our misery – in third place was Athelstan Chapter with 9, Leigh came second with 10 but the winners were Athol with an impressive 12 in attendance (and that didn’t even include the MEGS!!) and they were rewarded them with some choccies which were soon demolished. The Grand Superintendent then awarded another prize, that to the chapter which had the highest percentage of members attending – a lovely idea – which was won by St Augustine’s Chapter with 53%.

The Grand Superintendent was pleased to report that the Province had enjoyed a good year with a similar number of exaltations to 2018 which is good but he added that it would be have been great to have seen an increase! He had particularly enjoyed the long-service presentations and centenary meetings. He warmly thanked the Provincial Grand Master for his tremendous support adding that, during his tenure, he has rarely missed a significant Royal Arch event.

He then touched on the Members’ Pathway which is being used several lodges to encourage brethren to take the 4th step into the Holy Royal Arch and thanks those companions who have assisted with this. He then plugged Solomon adding that it simply keeps getting better and better. Most Warwickshire chapters are now ‘setting the scene’ – Solomon has not one but three versions of this! Take a look!!

One of the Grand Superintendent’s recent aims has been to improve visiting, hence the introduction of the Travelling Loving Cup. First awarded to Shakespeare Chapter, it was soon claimed by a retinue from Leigh Chapter. Athol Chapter then took possession before Leigh reclaimed it – some suggest it should be renamed the Travelling Leigh Cup!?! – and there it remains. Leigh’s next meeting, their installation, is on April 17th – game on!! 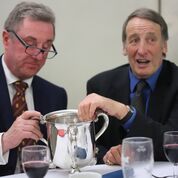 The Grand Superintendent expressed his gratitude to the ProvGSE, EComp David Graham, as well as EComp Gary Evans who is stepping down as the ProvAGSE after a number of years of dedicated service although he will stay on as the Provincial ‘Chief Whip’ (heaven knows what that apron badge would look like!). He also thanked E.Comp Mark Phillips and the Provincial Support Team for all their efforts.

Then came the news we’d all come for – who’s doing what! The MEGS announced that he would be pleased to re-appoint EComp Phil Gough as his Deputy. After three years as the Second Provincial Grand Principal, EComp John Emms is stepping down. EComp John has been ever present at meetings and the MEGS expressed his gratitude for all that he has done during his tenure. He then announced that EComp John Starley would be promoted to succeed EComp John as the Provincial 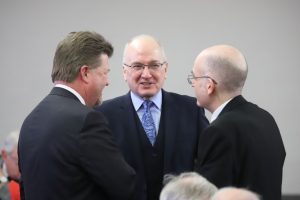 Grand Haggai. A hush descended over the room – who would be taking over as Provincial Grand Joshua? We were delighted to hear that it would be none other than the Provincial Grand Treasurer, E.Comp Nigel Hawkins – rich reward for his sterling service behind the scenes. E.Comp Jonathan Amies will succeed E.Comp Nigel and we all wish them all well in their new offices. Another important change of personnel is with Provincial Communications. With E.Comp Andrew Armbrister’s elevation in the Mark Degree, he is stepping down as Provincial Communications Officer and will be replaced by E.Comp David Harwood. I am sure that E.Comp David would appreciate your photos and snippets of news so please do get in touch with him.

Provincial news is very important but we’d also come to give our grey cells a work out with the promise of a challenging quiz. EComp Trevor Siddall stepped into the considerable shoes of the previous quizmaster, EComp Peter Sorrill, and acquitted himself admirably. There was an excellent mixture of Masonic – both Craft and Royal Arch based – and non-Masonic questions that got us all thinking. Sadly we couldn’t phone a friend or ask the audience but suspect that we all went home having learnt something. 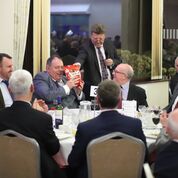 Having been thoroughly fed – literally (the food was excellent – complements to the chef!), Masonically and mentally – the assembled throng headed home but not before the Grand Superintendent wished us a safe journey and asked that we all enjoy our Royal Arch Freemasonry. 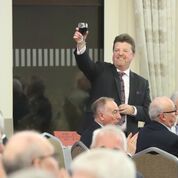